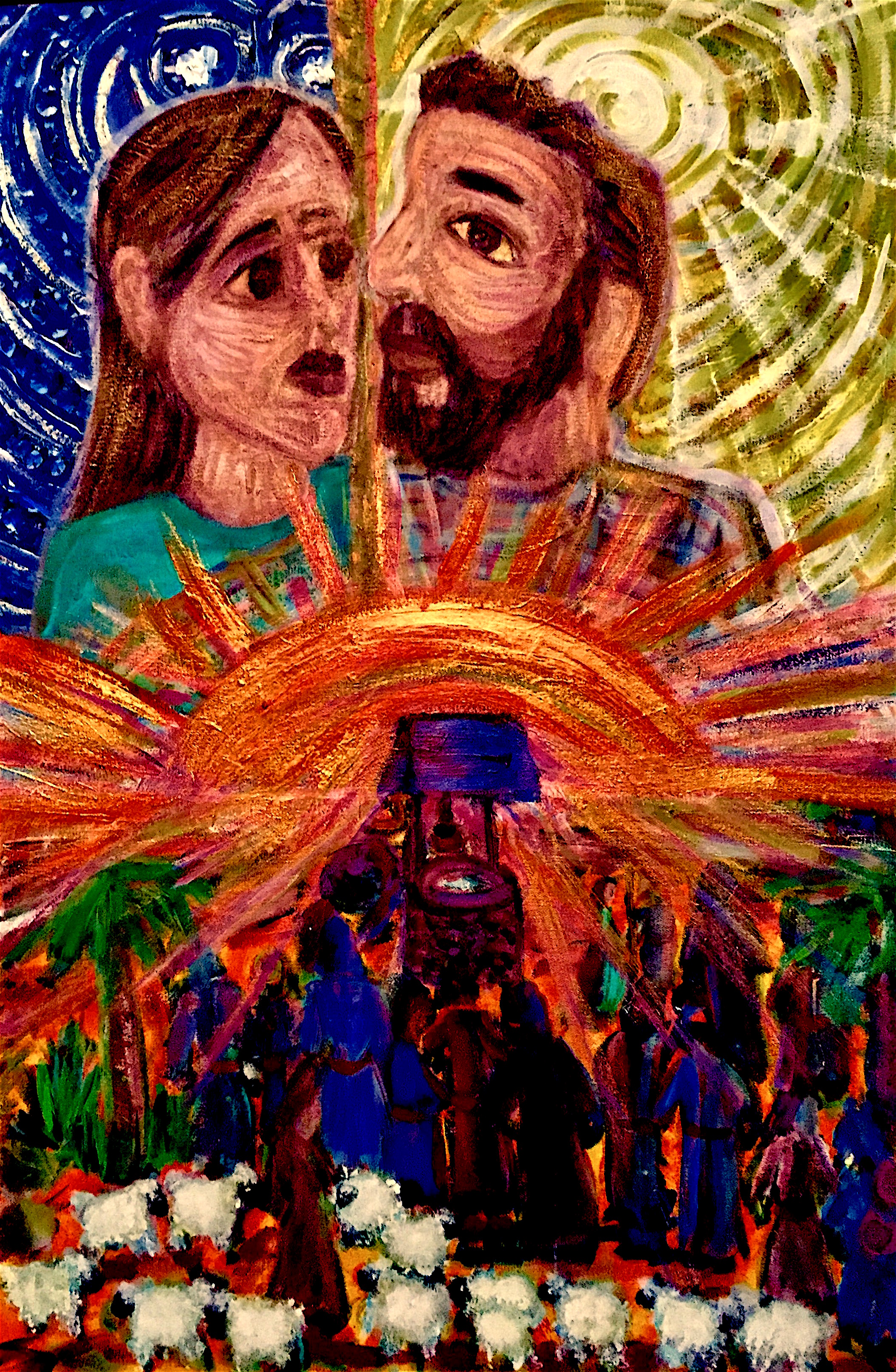 This painting projects the symbolism of the biblical archetype for "First Love".
Playing with the motifs and biblical narrative for the inspired  LOVE that erupts between Jacob and Rachel at first glance upon meeting at the "drawing well".
In Kabbalah, Jacob grows to symbolize the Divine attribute of Merciful healing, a aspect of harmonizing Sun that galvanizes growth along all of creation -- as the "Erech Anpin" of "Tifferes Yisroel". Rachel in the biblical narrative is a personification of Shechinah (Feminine Divine), the hidden benevolence and creative potentials latently awaiting within all things. She is often depicted as the moon, with the the many stars her great and many progeny of goodness. She advocates in merit and nurtures collective goodness into greater fulfillment.

Jacob and Rachel meet near twilight a time when the sun romances the moon -- the realized romancing greater mystique. This rendering evokes a powerful convergence of potentials as the aspirant's realized aspects of awareness romances into fulfillment the hidden parts of their soul's potentials. This sacred achievement is a attained as the aspirant releases the light obscured by perceived darkness within.

The biblical Jacob is long associated with introducing the spiritual devotions of the time of dusk, associated with the late "Mincha" prayer -- the twilight boundary between potential and fulfillment.

The "drawing well" is spiritually associated with creativity, potentials and greater awareness. Jacob and Rachel meet at the drawing well because their primordial bond summon the revelation to draw forth the wake of the soul's surfacing potentials.

Jacob, the personification for realizing mercifulness over the totality allows for connection for the hidden light of Rachel shrouded in the night's mystery, she is the Shechinah associated with future collective good will and attainment. Their love should not be confused with a superficial romantic love, but rather a devotional love that proves revelatory. They are perpetual partners in Sacred service to greater Divinity. Together they romance the potentials of the soul into greater fullness within each other and for greater creation.

Emblematically, in this depiction their love is separated on by the is signified by the staff of creation/ the miraculous "matteh"-- also known as the authority granted through the Shepherds staff of leadership --- it has long been a designation for a spiritual mastery gained from guiding, protecting and nurturing the hidden innocence within all things.

This painting is intended to highlight passages to greater love, discovery, inspiration and harmony. Upon glancing at the rendering the viewer is struck by the juxtaposition between the worldly foreground and the more direct heavenly perspective. As a spiritual aspirant or creative, approaching your personal wellspring of creative potentials and greater perspective can be at times a daunting path. Here, the painting depicts a young girl creating you as a shepherdess as your eyes approach the well. She is a personification of the constellation Virgo associated with the plentitudes of actualization, but here she shepherds over a flock of innocence. It is the same with direct pathways to creative fulfillment -- you must honour the innocence in all things and follow disciplines for seeing the world anew to draw gainfully on the soul's creative potentials. Although she appears out the line of sight of the more "worldly" figures ahead of her, the unconditionality of her devotions are key to achieving fluid states creative discovery.

According to tradition, Jacob and Rachel share love at first sight after Jacob wrestles off a large rock set by the shepherds to obstruct passage to the well's resources. Thereafter, he shares the sweet waters of the well in a way that is counter to our worldly values; he shares with the weakest first. This merciful attribute is what makes Jacob a fit partner for Rachel's caring eyes. Together, they join by the well, the shepherding staff in hand.

From a spiritual perspective, the ecstatic love of Jacob and Rachel is inspired by their shared devotion to fulfilling the full power of their soul's potentials and employing that awesome light most nobly.
This staff foreshadows to the shepherding staff needed to rescue innocence ---  the hidden sparks of light obscured by darkness -- the secret attributes of the "anointed of Joseph". Although he will suffer greatly for his charge, he will heal oppression into a restorative passion for renewed vigour and innocence that will help prepare our world for an age where true intimacy can reign at last over the hearts of all mankind.

Apologies, but no results were found for the requested archive. Perhaps searching will help find a related post.